The working class white and black have been hammered by destructive trade and immigration policies benefiting Wall Street Republicans in alliance with post-national Democrats obsessed by race and gender. The victory of president-elect Donald Trump is the product of a white working class revolt has many in our community hopeful. Trump was preferred by around 75% of the voters with Trump signs everywhere. The Bristol Herald Courier, a fake news site due to bias, omission of facts, and hostility towards Trump and his voters, is also part of the problem. Here is part of why we had this revolt:

For the first time since the Depression, the American economy has added virtually no jobs in the private sector over a 10-year period. The total number of jobs has grown a bit, but that is only because of government hiring...from July 1999, when the economy was booming and companies were complaining about how hard it was to find workers, through July of this year, when the economy was mired in the deepest and longest recession since World War II.

For the decade, there was a net gain of 121,000 private sector jobs, according to the survey of employers conducted each month by the Bureau of Labor Statistics. In an economy with 109 million such jobs, that indicated an annual growth rate for the 10 years of 0.01 percent...

But is this really true? Zero job creation in ten years? Or is it the jobs simply never went to Americans, but a massive illegal, underground labor force?

During this same period, not even counting the continuing explosion of work visas, we got 5.6 million naturalized citizens in addition to 10-20 million more illegal aliens and guest workers.

This is why American workers, even those with college degrees, are becoming a permanent underclass. American wage scales have been stagnant for decades as government and business work together to create this situation, then go off on a racism name calling binge to divert attention from the real issue.

The Richmond Times Dispatch (Nov. 24, 2016) claims illegal aliens number "more than a quarter million", but complains of a worker shortage. Yet Virginia Gov. Terry McAuliffe claims a $1.5 billion budget shortfall is because wage growth is so low to non-existent, income tax collections are down.

Virginia has for too long depended on high paying federal jobs to float the state finances and sequestration has shown the rest of the state economy is a shambles. Yet the Trump victory riding on an abusive and unfair economic system was foretold in Virginia, but both political parties ignored the warning signs.

The masses of imported illegal and legal immigrants drives down the wages of working people and supplies a cheap servant class for the affluent. Most of Virginia went for Trump, but wealthy Northern Virginia carried the state for Hillary. Time to start deportations and severe fines for criminal employers.

According to the New York Times (June 10, 2014) Cantor spent $5.4 million and while they noted the immigration issues in passing, chalked it up to he wasn't conservative enough, but missed the economic and other problems caused by mass immigration. Conservative has for too long been synonymous with Chamber of Commerce. Brat and Trump put an end to that fiction.

In 2010, illegal immigrants paid $183 million in state and local taxes in Virginia, according to the Institute for Taxation and Economic Policy. That included $109.6 million in sales taxes, $58 million in state income taxes and $15.5 million in property taxes.

The institute estimated that if the unauthorized immigrants were legally authorized to live and work in Virginia that amount would increase to $260 million in state and local taxes... If all illegal immigrants were removed from the Virginia workforce, the economic loss would be at least $11.2 billion and nearly 63,000 jobs...

First if the Institute for Taxation and Economic Policy knows these people are illegal aliens why are they not being turned over to ICE? This lawlessness is so open and blatant no wonder so many are angry about it. And how much in taxes are they not paying as they drive down wages reducing tax collections even further??

This assumes the false narrative that American workers wouldn't take the jobs and pay those same taxes and even more because the wage scales wouldn't be artificially depressed. Then we wouldn't be dealing with almost $2 billion in jails, welfare, and trying to get chronic low-achievers to learn anything in school. In fact the problem of low-achieving non-Asian minorities is so bad Virginia adopted an open policy of differing education standards based on race.

While these liberal operated schools dribble on about racism, etc. they can't educate these children for whatever reason including lack of intellectual ability. That doesn't change the fact, according to the Center for Immigration Studies (www.cis.org), that over 90% of Hispanic immigrant families legal and illegal are on welfare and it's a multi-generational problem.

In addition violent crime from Hispanic gangs such as MS-13 blanket many parts of the state - with blacks these two groups account for 70-80% of the violent crime in Virginia. What's the dollar cost of all of this violent crime? Mass illegal immigration has driven millions of blacks across the nation out of the labor force and into poverty. 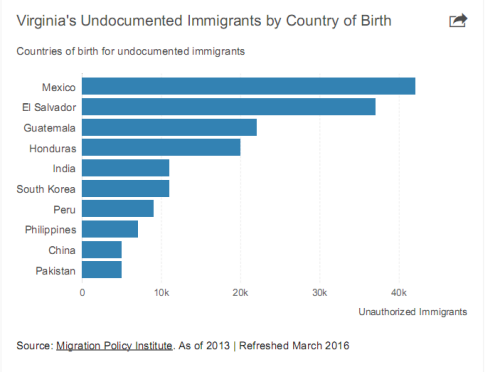 Virginia (officially) has almost as many illegal aliens as Arizona ranked at 10 and 9 respectively. While the Arizona illegal population is mostly Mexican, Virginia is heavily loaded towards Central America, Asians, and Muslims. Illegal alien Muslims are a huge security threat along with Chinese spying with so many government and defense agencies in the area of Northern Virginia. As a security matter we must institute immediate mass deportation of this entire population.

One Pakistani "immigrant", Aimal Khan Kasi, murdered two CIA employees and wounded three others in 1993, was later executed in 2002. Pakistan, along with Saudi Arabia, are hotbeds of Sunni (Wahhabi) terrorism. The Somali refugee that went on a stabbing spree at Ohio State University November 2016 came through Islamist Pakistan.

Going by critics such as Senator Jeff Sessions, he claims that we import with immigrants, illegal aliens, and work visas a staggering 2.5 million replacement workers per year, many never leave. That is 50 million people since 1996! Bear-Stearns before they went under in 2007 estimated even then the number was more like 20-30 million illegal aliens. The number of illegal aliens in Virginia could be easily 500,000 plus.

The The Underground Labor Force is Rising to the Surface report by Bear-Stearns highlights the following:

1. The number of illegal immigrants in the United States may be as high as 20 million people, more than double the official 9 million people estimated by the Census Bureau.

2. The total number of legalized immigrants entering The United States since 1990 has averaged 962,000 per year. Several credible studies indicate that the number of illegal entries has recently crept up to 3 million per year, triple the authorized figure.

3. Undocumented immigrants are gaining a larger share of the job market, and hold approximately 12 to 15 million jobs in the United States (8% of the employed)

4. Four to six million jobs have shifted to the underground market, as small businesses take advantage of the vulnerability of illegal residents.

5. In addition to circumventing the Immigration Reform and Control Act of 1986, many employers of illegal workers have taken to using unrecorded revenue receipts. Employer enforcement has succumbed to political pressure.

That where the jobs went for over a decade. This was going on as NAFTA devastated blue collar workers along with massive automation. I believe the 30 million illegal aliens is the correct number. Bristol never recovered from the 2000 bubble, then got hit with the 2007 housing bubble.

National economic downturns hit Bristol and similar communities like a battering ram. We get hit first and largely never recover. In addition political corruption at the state and local levels in addition to hostility and disdain of the ruling class towards poor and working class whites adds to the problem.

Republicans are rabidly hostile to labor and act as a branch of the Chamber of Commerce opposed to anything considered pro-labor. Republicans in Virginia are open-borders corporate-welfare snobs and elitists. They can't get enough replacement workers to boost business profits.

Democrats are simply open border racists including the local press and the government parasite class, while all for welfare expansion, are hostile to traditional culture and harbor disdain of blue-collar and working class whites who dominate here.

Local environmentalists, many who relocated here, attack most local economic development and display livid hostility towards the coal industry that provides one of the few avenues of a middle class living to those without advanced degrees or political connections.

Let's be careful not to scapegoat Mexicans, etc. but deal with the culture of greed and corruption in American business and liberal opportunism that causes these problems. See Yellow Press Lies About Mexicans. Nearby Hamblen County, Tennessee has imported thousands of illegal aliens that have spilled across the region taking a number of low-wage jobs created here. Tennessee ICE refuses to touch them, hopefully under a Trump administration they will be removed.

So nobody gets the wrong idea here, I believe in absolute equal treatment of everyone regardless of race, etc. One's worth is based on merit, achievement, and hard work, period. Non-whites must be held to same standards and treated exactly the same as white people with the same expectations, period. There is no right to equal outcome and affirmative action is simply state-sanctioned racism. What is it about "equal" treatment or a color-blind society you don't understand? What is it about Rule of Law you don't understand?