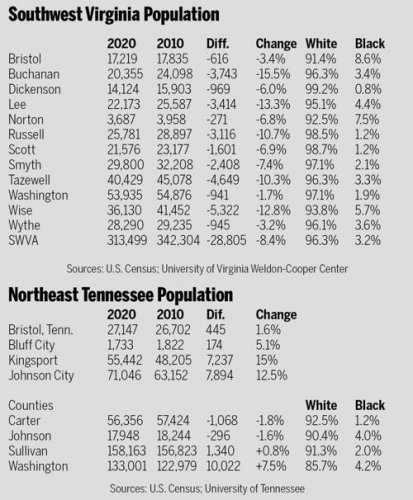 How could they spend millions on jobs and economic development and lose almost another 29,000 residents?

What is social apartheid? What does that have to do with Bristol, Virginia-Tennessee? Or Appalachia in general?

Some define this as "Social apartheid is de facto segregation on the basis of class or economic status, in which an underclass is forced to exist separated from the rest of the population."

This is covered up as race elsewhere, but here the population is 90% plus white. For that reason the working class in the Bristol region faces hostility from Democrats for race-class, and from Republicans' rabid pro-business anti-worker attitudes plus class warfare.

Millions flow in from government grants, etc. but the general public is barred from the input process, locked out of government meetings. They are bypassed when money is handed out, often from secret backroom deals.

The Bristol Herald-Courier August 21, 2021, notes the following report from our Chamber of Commerce, paid for by a $81,000 Government grant:

BRISTOL, VA. -- The Bristol Chamber of Commerce on Wednesday released a report detailing the Twin Cities' biggest challenges and opportunities for economic growth... The report cited an aging population, the "brain drain" effect of talented workers "moving away to seek better employment opportunities" and low wages as some of the area's top barriers to economic development...

Darn they dare mention low wages, something they have fought to maintain for years!

No kidding, the very things I documented here for over 20 years without a government grant to waste.

Often referred to as Tri-Cities centered around Kingsport, Johnson City, and Bristol. It often includes Scott and Washington Counties Virginia.

Myself in the news:

Update September 3, 2019. Based on data from Dr. Steb Hipple economist at East Tennessee State University (retired), his data goes to the 3rd. quarter of 2016. The level of job losses is Tri-Cities is staggering.

The Tri-Cities Consolidated Statistical Area is composed of the Kingsport, Bristol, Johnson City, and surrounding counties.

The Bristol Virginia-Tennessee, Kingsport, and Johnson City Urbanized Area Labor Market lost thousands of jobs shrinking the labor force that shrank unemployment rates. The above table shows a decline in the labor force by almost 18,000.

Since 1990, the labor force may have dropped by 50,000. It may have recovered some since 2016 except for the China Covid pandemic.

The Chamber of Commerce that owns local politicians fights hard to keep pay low, unions and worker protection out.

Politicians fight anything that benefits workers, but can't pull out the public checkbook fast enough to fund corporate welfare and waste.

Poverty and low pay are seen as a business asset and something to be proud of. It is related to statements such as this from local politicians:

"high unemployment actually can be an advantage because it increases the number of available workers...Our labor force is a huge advantage since the county unemployment rate is twice the state average, and regionally, the unemployment rates range from 3.5 percent to 15 percent..."

Or this statement from a man whose company received $10-$20 million in public subsidies to create 120 jobs, then filed for bankruptcy and left:

"It's a little-known fact that roughly 20 percent of the children in Southwest Virginia live below the poverty line and go hungry every night."

How could the expenditure of billions of dollars in government grants, economic development, etc. result in so little public good?

How can spending millions in transportation, other economic development funds for an abandoned train station be rational? No trains run today, 15 years later the building is still empty.

What does horse trails and a horse camps facilitate transportation? Spending transportation funds on this is either irrational or simply fraud?

Washington County Virginia says this in relation to economic development which isn't about jobs for those that live here:

Economic development does not necessarily mean growth, although growth of both population and revenue may be a result. Economic development means strengthening of the economic base of the community or the part of the local economy that brings in money from outside the county.

In reality the money goes to the "haves" that control where it goes and who benefits.

Spending over $100 million on 4-6 clean energy "research" result in empty buildings? Great for consultants, contractors, and their friends.

"The most corrupt region is Southwest Virginia - more indictments for political and public office corruption have happened in this region than all other parts of the state combined."

To quote Rex Todd of Winston-Salem, N.C.-based The Landmark Group, "Rather than have the working-class people sequestered on one side of town and the rich on the other side of town, the idea is to integrate people..."

To quote former Washington County supervisor Paul Price, "The rich get richer, and the poor never catch up."

Creating real jobs or raising the standard of living for workers, the priority is the opposite.

In fact, a so-called "futurist" came to Tri-Cities at the behest of business leaders to sell the idea. He gave a speech in Kingsport. Ed Barlow of "Creating the Future"

"A significant component of your economic future in Sullivan County is recruiting Hispanics, making sure they get highly educated and integrated into the community. ... They can fill all of the various job categories you have. The future economic vitality model is based on the back of a well-educated, ethnically diverse work force..."

Comment: what in the heck do illiterate, unskilled Hispanics have to do with "well-educated" working minimum wage jobs? They imported thousands of illegal alien Hispanics into nearby Morristown and Hamblan County, Tennessee, with double-digit poverty rates. More here...

In 2009 Exide announced the firing of 567 workers at its Bristol battery plant. That was 70 percent of its workforce.

Opened in 1994, Exide's Bristol plant is a manufacturing and distribution center for lead-acid batteries used in the automotive, marine and specialty industries.

They had 817 employees at the time. They did some rehires that were proclaimed "new jobs."

Typical is the almost $2 million Ralph Stanley Museum that failed, and was taken over by the Town of Clintwood.

My sister lives there and there is no evidence this project brought jobs, etc. to Clintwood.

It is still there today. It is closed but supposed to open this spring in 2022.

Why didn't Ralph pay for his own house?

Note Dickenson County has lost another 10% or more of its population since this opened. This museum is simply a gimmick in my view to funnel government grants.

See Looking back at the waste of Virginia Tobacco Funds.

I wrote the following and stand by it today. In 2022 these efforts have produced little, if anything.

Re: Virginia Tobacco Funds (December 6) the Times-News has missed the mark. These funds that should have gone for education, health care and economic development have become a ready source of fraud and waste for local Southwest Virginia governments.

This has produced nothing in the way of real jobs or helped the common people.

Tourism doesn't create good jobs, if at all. My relatives in Wise, Dickenson, and Russell Counties know of nothing any of these museums have brought in.

Carter's Fold near my home, has been given over $500,000 in government grants and hasn't produced a single job.

In one case they admitted running lines to areas they knew would never produce anything, then kept half the grant ($350,000) for expenses.

All they did was overbuild existing fiber optic infrastructure and have not connected a single customer that didn't get services before. After running up a whopping $50 million in external debt, they have failed to create a single job or bring in a single new business two years later.

Now Bristol, Tennessee is prepared to commit the same stupidity, while Bristol, Virginia has the highest electric rate in Tri-Cities.

The company kept the money. Washington County gave away $40,000 for a non-profit retirement community study that produced nothing.

As for Joy Manufacturing in Duffield, explain why they closed their facilities in Washington County, Virginia, industrial parks at the same time. The net result was a loss of over 100 jobs and millions in losses to taxpayers.

It's time to stop the waste and use tobacco grants for what they were intended for.

Sprint has turned down a lucrative corporate welfare package from Bristol, Virginia, and will jump the state line to Sullivan County.

Lieutenant Governor Bolling along with local economic development hacks are having a pork party in Wise County.

Republicans scream about government waste with President Obama and his failed stimulus plan.

They call it waste, but do the very same thing.

Nothing is known to have come of this deal.

For a larger view of above click American Labor Participation Collapse

This was before the China Covid virus.

Below is more proof and the last I'll write on this subject. Morgan Griffith is my congressman VA 9th. Phil Roe represents East Tennessee 1st and is retiring. They are worthless.

Update December 2019: One of the worst child abuse cases in Sullivan County is in the news again. See Baptist Preacher-Wife Sentenced to 179 Years

Update July 2017: I warned about Nulife Glass and predicted it was a scam. In June they fired the few people they hired and left Bristol with between 20-30 million pounds of CRT glass - glass loaded with lead. Press reports claim Bristol is trying to sue the company but likely will get stuck with disposal. They sold a $1.3 million building for less than $200,000 and half of that was payed for by grants.

Another victim of a black criminal on parole. Yes - white lives matter too!

The press has created a hysterical circus when three white men were wrongly accused of raping a black prostitute. Yet virtually nothing on the brutal Knoxville carjacking, rape, and murder of two white kids. Even my local paper the Bristol Herald Courier wouldn't cover the killings 90 miles away while running reports on nonsense across the country. They were angry when I called them on it. They started carrying the reports.