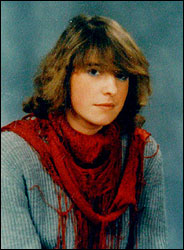 Raised as Catholic in Belgium, She Died as a Muslim Bomber

Muriel Degauque is believed to be the first European Muslim woman to stage a suicide attack. She started out life as a good Roman Catholic girl, turned drug user, then Muslim convert. She ended her life in Iraq at age 38. She detonated an explosive vest amid an American military patrol in the town of Baquba on Nov. 9, wounding one American soldier.

Her life in violent Islam shocked Europe, but "her story supports fears among many law enforcement officials and academics that converts to Europe's fastest-growing religion could bring with them a disturbing new aspect in the war on terror: Caucasian women committed to one of the world's deadliest causes. European women who marry Muslim men are now the largest source of religious conversions in Europe."

But those once attacked to violent Marxism, Islam is now the choice. To quote, "conversion is a political act, not unlike the women who joined the ranks of South American Marxist rebels in the 1960's and 1970's. "They are people rebelling against a society in which they feel they don't belong...They are people searching through a religion like Islam for a sense of solidarity...such women married to the first wave of Europe's militant Islamists a decade ago, and some of them followed their husbands to Taliban-ruled Afghanistan. But while they supported their husbands' militancy..."

European officials have warned about this problem for years. Muriel started out on drugs in high school, but was never arrested. "She married a much older Turkish man in what neighbors presumed was an arrangement to help him legalize his status in Belgium," then divorced about two years later. She met an Algerian man who introduced her to Islam.

She began appearing at her parents' home wearing a head scarf." At least she stopped drinking and using drugs. She later met and married a Mr. Goris already known to Belgian Police as a radical Islamist. She went to Morocco, where she learned Arabic and studied the Koran. She returned wearing the full length garb worn by Muslim women of North Africa.

Like many Muslims she lived on government dole and "seemed happy....Her mother complained to friends that she was losing her daughter to her son-in-law's strict interpretation of Islam...(Muriel) demanded that her parents follow Islamic customs when she and her husband visited, forbidding her father to drink alcohol or the men and women to eat together." All the sudden she "acted perfectly normal" and her parents were stunned when she called from Syria.

"The Belgian Police now say that Mr. Goris had fallen in with a group of Islamists focused on recruiting European Muslims to fight with Abu Musab al-Zarqawi's terrorist network in Iraq. The police had been monitoring the group for months when they intercepted phone calls from Goris in Iraq indicating that he and his wife were already there. The police say the couple left Belgium by car and eventually entered Iraq from Syria."

The Belgians notified the Americans about the couple and their plan on carrying out attacks. Muriel struck and little remained after the explosion in which she died. American troops shot her husband, "who was also wrapped in explosives before he could detonate his charges. Belgium police arrested 14 people, released all but five of them, including the 18-year-old girlfriend of a suspect who was also being pressured to leave for Iraq. A local newspaper quoted her on Saturday as saying that believed that Muriel was now in "paradise."