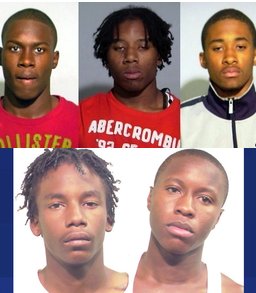 Rasmussen reports on July 13, 2013 that blacks are considered the most racist - even by other blacks.

Liberal voters see whites as more racist than do conservative or black voters. The reason for this is simple in that they play up racial hatred and discord for political gain. Also, their definition of racism is so vague and broad. Let's call them what too many really are follow - critical theory. Race has replaced class for those on the left even though their leaders are 95 percent white.

Thirty-seven percent (37 percent) of American Adults think most black Americans are racist, according to a new Rasmussen Reports national telephone survey. Just 15% consider most white Americans racist, while 18% say the same of most Hispanic Americans.

From a partisan perspective, 49% of Republicans see most black Americans as racist, along with 36% of unaffiliated adults and 29% of Democrats.

Among black Americans, 31% think most blacks are racist, while 24% consider most whites racist and 15% view most Hispanics that way.

Among white adults, 10% think most white Americans are racist; 38% believe most blacks are racist, and 17% say most Hispanics are racist.

So-called "liberals" have a vested interest in playing up white racism while playing down minority racism and violence.

See Race as an Issue in the 2012 Elections

Oprah Winfrey has net worth of $2.9 billion and earns $300 million a year. (www.celebritynetworth.com) She can be as racist as she wants even hinting at white genocide, yet for all her billions earned in a "white" America she sees as racist, she does nothing with her vast fortune to help poor blacks in Chicago.

She says, "older white people who were born, bred, and marinated in prejudice and racism to die", but if I said anything even remotely like that against any special protected group I could lose my job. Rev. Jesse Lee Peterson, Founder and President of BOND (Brotherhood Organization of A New Destiny) says,

"Oprah Winfrey is sending a destructive and racist message to black youth. She made the outrageous claim that blacks in America are still terrorized by whites because of their race. I am calling on Oprah to back up her claims and give proof of blacks being terrorized by whites ... but she can't - because it's not happening...

To the contrary, it's black thugs who viciously attack and commit crimes against whites. Black criminals are also killing other blacks in cities like Chicago, which is Oprah's hometown. Last year, the city had 500 black on black murders. When will Oprah talk about black racism and terror?"

Update August 2018
Google has determined this page "Dangerous and Derogatory".
Thus is barred from advertising revenue.