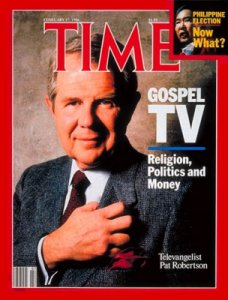 Television evangelist Pat Robertson said Monday on his live news-and-talk program "The 700 Club" that Islam is not a religion of peace, and that radical Muslims are "satanic." Robertson's comments came after he watched a news story on his Christian Broadcasting Network about Muslim protests in Europe over the cartoon drawings of the Prophet Muhammad.

He remarked that the outpouring of rage elicited by cartoons "just shows the kind of people we're dealing with. These people are crazed fanatics, and I want to say it now: I believe it's motivated by demonic power. It is satanic and it's time we recognize what we're dealing with." Robertson also said that "the goal of Islam, ladies and gentlemen, whether you like it or not, is world domination."

In a statement later Monday, Robertson said he was referring specifically to terrorists who want to bomb innocent people as being motivated by Satan. In the news story, he noted, radical Muslims were shown screaming: "May Allah bomb you! May Osama bin Laden bomb you!"

Angell Watts, a Robertson spokeswoman, said in a telephone interview that the news segment also included comments from a moderate Muslim in the United Kingdom saying radicals don't represent most Muslims in that country.

Robertson's Virginia Beach-based network did not include his remarks when it posted the program on its Web site, however. That decision was made out of concern Robertson's remarks could be misinterpreted if viewed out of context, Watts said.

Monday's comments were similar to remarks he made on his program in 2002, when he said Islam "is not a peaceful religion that wants to coexist. They want to coexist until they can control, dominate and then, if need be, destroy."

Robertson has come under intense criticism in recent months for comments suggesting that American agents should assassinate Venezuelan President Hugo Chavez and that Israeli Prime Minister Ariel Sharon's stroke was divine retribution for Israel's pullout from the Gaza Strip.

Robertson recently told ABC's "Good Morning America" that he comments off the cuff after watching news segments. He later told the Christian magazine World that he's being more careful and reviewing news stories before going on the air.

The Rev. Barry W. Lynn, executive director of Americans United for Separation of Church and State, called Robertson's new comments "grossly irresponsible." "At a time when inter-religious tensions around the world are at an all-time high, Robertson seems determined to throw gasoline on the fire," Lynn said in a statement.