Who did what for Israel in 1948? America Did Nothing

Testimony of Arafat's Nazi Uncle in 1937 on Palestine

The Mufti of Jerusalem, Haj Amin al-Husseini was a Nazi who mixed Nazi propaganda and Arab Nationalism and was wanted for war crimes in Yugoslavia. His mix of militant Islam was an inspiration for both Yasser Arafat and Saddam Hussein. He was also a close relative of Yasser Arafat: Arafat's real name was Abd al-Rahman abd al-Bauf Arafat al-Qud al-Husseini. (Arafat was born, raised, and educated in Egypt and was a paid terrorist for Egypt.) Arafat himself tries to keep this a secret while Saddam Hussein was raised in the house of his uncle Khayrallah Tulfah, leader in the Mufti's pro-Nazi coup in Iraq in May 1941.

Items in bold are my comments.

Evidence of Haj Amin al-Husseini Before the Royal Commission LORD PEEL: ... Just one question, then. You want completely to stop Jewish immigration. What do you want to do with the 400,000 Jews here at present?

MUFTI: They will live as they always did live previously in Arab countries, with complete freedom and liberty, as natives of the country. In fact Moslem rule has always been known for its tolerance, and as a matter of fact Jews used to come to Eastern countries under Arab rule to escape persecution in Europe. According to history, Jews had a most quiet and peaceful residence under Arab rule....

This region had not been under Arab rule for centuries but under Turkish rule. Turks were far more tolerant and fair with Jews then most Arabs ever were. They gave refuge to Jews and others fleeing Christian terror in Europe for centuries. In the mid 1800's they gave formal legal protection to Jews (something Arabs refuse do even today) and encouraged Jewish immigration. They strongly approved of Zionism because the whole region was a depopulated wasteland and hoped to bring prosperity to a crumbling Ottoman Empire. L. Loflin

MUFTI: But I can say that the Jews, many thousands, are actually living in Iraq and Syria under Arab rule and have the same rights and the same position as the other inhabitants of the countries.

SIR L. HAMMOND: Would you give me the figures again for the land. I want to know how much land was held by the Jews before the Occupation.

MUFTI: First of all I would like to say that one of the members of our Committee will deal later with the land question, but nevertheless I will give you the figures. At the time of the Occupation the Jews held about 100,000 dunams.

MUFTI: At the date of the British Occupation.

SIR L. HAMMOND: And now they hold how much?

MUFTI: It may be that the difference was due to the fact that many lands were bought by contract which were not registered.

MUFTI: Sarsuk. An Arab of Beirut.

SIR L. HAMMOND: His Eminence gave us a picture of the Arabs being evicted from their land and villages being wiped out. What I want to know is, did the Government of Palestine, the Administration, acquire the land and then hand it over to the Jews?

MUFTI: In most cases the lands were acquired.

SIR L. HAMMOND: I mean forcibly acquired-compulsory acquisition as land would be acquired for public purposes?

SIR L. HAMMOND: But these lands amounting to some 700,000 dunams were actually sold?

MUFTI: Yes, they were sold, but the country was placed in such conditions as would facilitate such purchases.

SIR I HAMMOND: I don't quite understand what you mean by that. They were sold Who sold them?

MUFTI: In most cases they were Arabs.

SIR L. HAMMOND: Was any compulsion put on them to sell? If so, by whom?

It was sold willingly by Arabs. He admits this, but...

MUFTI: As in other countries, there are people who by force of circumstances, economic forces, sell their land.

SIR L. HAMMOND: Is that all he said?

MUFTI: They were not prevented from selling the land, and mostly the country was in such economic condition as facilitated the sale. If the Government had the interest of these poor people at heart they should have prevented sales and these people would not have been evicted from their land. A large part of these lands belong to absentee landlords who sold the land over the heads of their tenants, who were forcibly evicted. The majority of these landlords were absentees who sold their land over the heads of their tenants. Not Palestinians but Lebanese.

On the one hand he tries to claim economic circumstances forced these property owners to sell but turns around and admits they are absentee landlords who happened to be rich (living in Lebanon just down the road) and the people there were tenants. But...

SIR L. HAMMOND: Is His Eminence in a position to give the Commission a list of the people, the Arabs who have sold lands, apart from those absentee landlords?

MUFTI: I am sure the Department of Lands can supply such a list.

SIR L. HAMMOND: I didn't ask him to tell me where I could get the information from. I asked was he in a position to give it to me.

MUFTI: It is possible for me to supply such a list.

SIR L. HAMMOND: I ask him now this: does he think that as compared with the standard of life under the Turkish rule the position of the fellahin in the villages has improved or deteriorated?

MUFTI: Generally speaking I think their situation has got worse.

MUFTI: Taxation was much heavier then, but now there are additional burdens.

SIR L. HAMMOND: I am asking him if it is now, the present day, as we are sitting together here, is it a fact that the fellahin has a much lighter tax than he had under the Turkish rule? Or is he taxed more heavily?

MUFTI: The present taxation is lighter, but the Arabs nevertheless have now other taxation, for instance, customs. On this very point a member of the Arab Committee will deal.

LORD PEEL: On the burden of taxation?

LORD PEEL: And the condition of the fellahin as regards, for example, education. Are there more schools or fewer schools now?

MUFTI: They may have more schools, comparatively, but at the same time there has been an increase in their numbers. 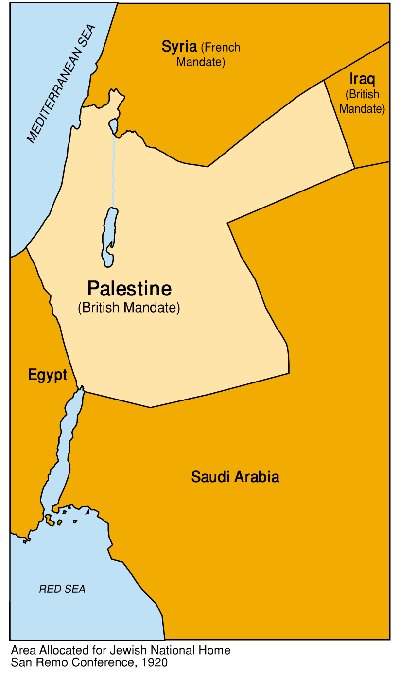 The "increase in numbers" is the truth. The British while blocking Jewish immigration had allowed Arabs to pour in from surrounding countries to swell the Arab population and appease people like this. In 1921 the whole region (see map above) only had 700,000 people. If this was so bad, why did so many move in?

SIR L. HAMMOND: Is there any conscription for the army now?

He admits the Arabs are not overly taxed, forcibly conscripted into the military, have schools, etc. out from under Muslim rule. But...

SIR L. HAMMOND: Would the people like to have that back?

MUFTI: Yes. Provided we have our own Government.

What he really means is the rule of him and his wealthy family. That way he can steal everything he can get. Palestine, a British creation from WWI was a wasteland and economic basket case as are Muslim lands today. The only wealth and development in the whole region was that done by Jews. He wanted it all and his family had never done anything for a single poor Arab even to this day. Arafat, according to Forbes, is worth over $300 million while his people starve. Who says stealing from one's own people isn't profitable?

SIR L. HAMMOND: Then am I to take it from his evidence that he thinks the Arab portion of the population would be more happy if they reverted to a Turkish rule than under the present Mandatory rule?

MUFTI: That is a fact.

Much of the above material was collected by Joseph E. Katz Middle Eastern Political and Religious History Analyst Brooklyn, New York I cross checked it, it's correct.