Update for 2015. Since this was published on 2010 there has been no real job recovery at all, but even government employment is now falling as budget cuts have swept state and local governments. Private sector job gain has been terrible with even college degrees becoming worthless. Yet for 15 years with no private sector job growth we imported 1-2 million legal/illegal immigrant replacement workers every year.

Most of the job creation what little it is there is part-time low-pay. Or taken by immigrants and illegal aliens. In 2014 we are starting to see increased violence and social unrest that more than the police shooting of a black thug in Ferguson Missouri. Tech workers are under attack in the San Francisco area as they push poor Hispanics and Blacks out of housing.

"For the first time since the Depression, the American economy has added virtually no jobs in the private sector over a 10-year period. The total number of jobs has grown a bit, but that is only because of government hiring," says the New York Times. From 1999 to 2009, even with so-called "booms", the private sector created only 121,000 (a miniscule 0.01 percent) private sector jobs.

During this same period millions of third-world immigrants and illegal aliens were brought in to allow business to fire and replace Americans from what jobs still existed. Companies claimed to have problems hiring workers as they lowered pay checks during the phony government induced "bubble" boom after 2001. 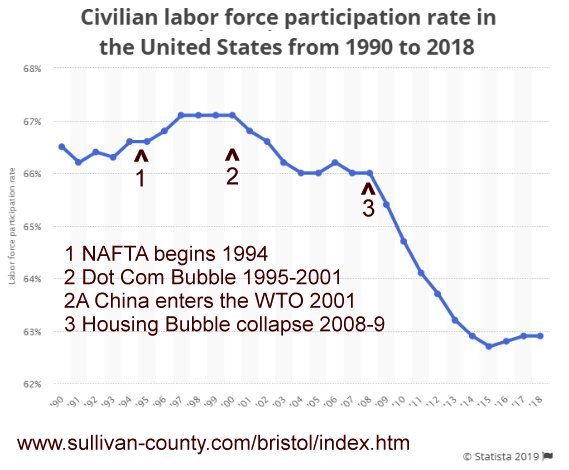 The graph above illustrates the bad situation for American workers.

From 1995 to ~2001 the we got the tech bubble that inflated the labor force even while NAFTA destroyed millions of manufacturing jobs. At the time we did manufacture some electronics.

In 2001 China entered the WTO and between Mexico and China decimated many more manufacturing jobs across the board. Even with the artificial Bush housing bubble overall labor participation rates fell. So many jobs were lost to China and Mexico even the Bush housing bubble couldn't replace the jobs lost. The 2008-9 housing bubble failure crashed the entire labor market that has never recovered.

The only real gains were government jobs and government funded/generated services such as health care, education, lawyers, and accountants. While there was hiring in computer systems designers (2.4 percent), management, consulting etc. (5 percent), much of that went to H1b visa holders where companies fired and displaced their American workers with cheaper foreign labor. In many other cases the jobs were simply outsourced to India. Even the consumer (stores, retail, etc.) economy jobs fell at a rate of 0.2 percent.

But what little jobs this "hi tech" industry created never benefited the average American worker as the manufacturing of the equipment went to overseas slave labor. To quote, "but while designing computers and related equipment was a growth field, building them was a very different story, as the manufacturing shifted largely to Asia. The number of jobs making computer and electronic equipment in the United States fell at an annual rate of 4.4 percent, substantially more than the overall decline in (general) manufacturing jobs, of 3.7 percent."

The bubble building and financial industries created more problems. The building boom and related industries created by financial fraud and speculation on Wall Street kept the economy propped up on paper. While many construction jobs went to illegal aliens, many Wall Street created jobs that created nothing of value in the real world have now disappeared along with the artificially created construction boom. The real net loss of jobs can far exceed any the Times claims was created. That's not counting falling wages for millions of working Americans during this period.

Many construction jobs went to illegal aliens, in particular in non-union states such as Tennessee and Virginia. The Virginia Department of Transportation and even state/federal contractors in Tennessee hire illegal aliens. I.C.E in Knoxville, Tennessee refuses to even pick them up when released from jail because they claim the cost is too high to deport them! Yet when citizens in Morristown Tennessee attempted to protest the lost of over 1000 jobs in this job poor, high poverty community to illegal aliens, they were met by SWAT teams, helicopters, and state police.

According to Michael A. Fletcher on the recent recession,

"The recession has directly hit more than half of the nation's working adults, pushing them into unemployment, pay cuts, reduced hours at work or part-time jobs...which destroyed 20 percent of Americans' wealth."

Was there any real wealth to begin with? Was it simply inflated prices? How much employment was simply foolish spending and borrowing? The latter seems to be the case and there's little hope of any real recovery for years. To further quote Mr. Fletcher,

While a broad swath of Americans have been hurt by the recession, blacks, who have a 15.5 percent unemployment rate, and Hispanics, whose jobless rate is 12.4 percent, have suffered disproportionately. Not only have they endured massive job losses, but they also have been hardest hit by housing foreclosures. Still, black and Hispanic workers are among the most upbeat groups...

The reason they were hit with the highest number of foreclosures was they weren't qualified to get the loans to begin with. While government under Bush and Clinton strong-armed banks into making these stupid loans for "diversity," they actively worked to destroy the very jobs both groups rely on heavily.

Why are they upbeat? They believe that President Obama and his racial "redistributive" agenda will save the day for them. Yet his administration and the Democratic Party in general, allied with business interests, will continue to support massive immigration legal and illegal. This will hit hardest both blacks and Hispanics, driving more and more of them into government dependence. This permanent underclass is a ready source of votes for the political Left Progressives.

The end result was the average American lost out even with the phony "bubble" booms while corporations, government, and illegal aliens benefited. When law-abiding citizens even attempt to protest against what has become state-sanctioned organized crime, they are met by police and called racists. The practice continues despite the length of this recent recession. Government spending this time doesn't seem to working. The continuing refusal of government to address this illegal alien travesty will only increase social tensions and discord within the general community.

Recession cut into employment for half of working adults, study says By Michael A. Fletcher Washington Post June 30, 2010; A13