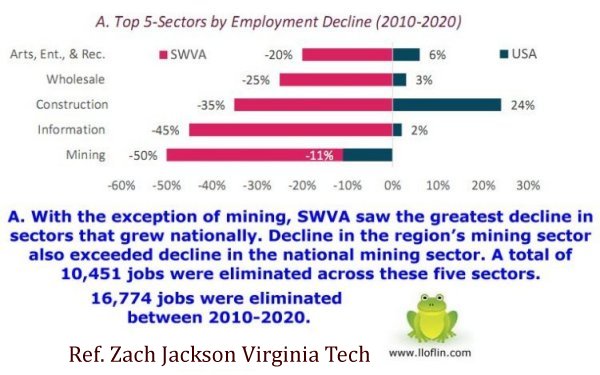 Update February 2012: The scores of new jobs promised in the region for the $120 million spent by the Virginia Tobacco Commission for fiber optic lines has never materialized. The region's economy is if anything even worse than 2000 when this began. Sorry but call centers we got before and that's all we still get. This page stands simply as historical record. L. Loflin

Public records have revealed the true cost of socialized telecom at BVU is over $60 million. The costs are as follows: $27.5 million in direct, external debt (revenue bonds) by OptiNet. $15 million borrowed from the Electric Company forcing them to borrow elsewhere to pay for mostly corporate welfare. $10 million for a new building mainly it seems to house Optinet that was charged back to electric customers. About $5 million in economic development grants that have produced little, plus an additional $5 million for Optinet in fiscal year 2005. Losses for Opti-Net in 2004 is another $3.5 million. I see nothing illegal here, but the public should have had a say in this.

Update February 2010: None of the promised jobs have been created. The utility is over $49 million in revenue bond debt. They have gone through a series of rate increases, most unrelated to OptiNet.

Bristol Virginia has been ranked as one of the top seven "intelligent" communities in 2009.

Bristol is located in a rural, low-income region whose traditional products - tobacco and coal - are in major decline. Starting in 1998, Bristol fought incumbent telcos in court and the state legislature to win the right to deploy a fiber network called OptiNet. It was conceived as a backbone serving government and schools but grew into a fiber-to-the-premises network for business and residents in Bristol and four neighboring counties. With a 62% market share, OptiNet has saved its customers an estimated $10 million. It has also attracted more than $50 million in private investment, including the region's first technology employers, and improved rural education and healthcare by connecting local providers to leading institutions.

I've lived here since leaving the army in 1981. I'm an adjunct professor (part time) at a local community college and teach electricity, electronics, and computer electronics. I have over 25 years in electronics and related fields. Nobody wants broadband to succeed more than myself. It just won't work. Government efforts to create jobs (private sector at good pay) in this region are an utter failure. I'm sick of watching our college graduates here being told to relocate or refused employment.

See http://www.opticalsolutions.com/ (FiberPath 400 system) and see who got the money and jobs.

Excerpts from Virginia City of Bristol to Serve as ISP Roy Mark on 02/08/02:

Bristol Virginia Utilities (BVU) has contracted with Optical Solutions Inc. to deploy an optical networking system in a competitive, aerial overbuild to the businesses to 1,100 Bristol-area businesses in the first phase of construction. The BVU network will serve the community's 16,000 residents. BVU said it is implementing the project to foster economic development in the area and enhance the quality of life for residents. "A fiber-optic network will make all the difference in allowing Bristol's business community to grow and compete for jobs on the upper-end of the wage scale," said Jim Kelley, manager of telecommunications for BVU. "We cannot afford to wait for the day when private industry decides to deliver competitive broadband services to our community."

The Bristol overbuild marks the first significant deployment of the Minnesota-based Optical Solutions' FiberPath 400 in a business application. "Optical Solutions has been synonymous with fiber-to-the-home for several years, but the Bristol deployment should make it clear that our latest generation system can handle the communication needs of high tech businesses -- and the needs of an entire community," said Chairman and Chief Executive Officer (CEO) Darryl Ponder.

Guess Mr. Ponder is very happy with the millions they just made on their "latest generation system." We need new jobs that pay middle class wages, not subsidized broadband for established low-wage employers.

Buying costly infrastructure for this is nothing to be proud of. VCEDA clearly says these jobs pay about $6.18 an hour and my own investigation has confirmed this. $15,000 to $20,000 or more in subsidies per job is obscene. That same money could be used to further education.

I've talked to public officials in Bristol and Washington County, Virginia and they claim we can't get better jobs because of our lack of an educated/skilled workforce. Our high schools suffer (some claim) a 50% dropout rate, community colleges about 60%. The chronic low pay forces those that do make it to relocate. Every guidance counselor in this area will tell you that if you want above $6-8 an hour, move out. After a closer investigation of these claims of "uneducated" workforce, I believe the claim is bogus. The real problem seems to be uncompetitive wage scales.

The Electronic Village of Abingdon, Congressman Boucher's brainchild has produced nothing. I've asked Abingdon officials for a list of jobs this thing created. They can't/won't produce it. The only thing we ever get there is retail like Wal-Mart. (I'm actually a Washington County resident but BVU customer and Bristol address. Abingdon is the county seat.) Congressman Boucher has also refused to produce a list with pay scales, cost to taxpayers, and required education levels. VCEDA has also refused.

They also gave $25,000 to US Solutions in Bristol from the Tobacco fund for economic development. When I questioned Senator Wampler's office on what they were using it for, they didn't know. According to them, once grants are given, it's out of their hands. The City of Bristol when questioned also claimed they didn't know. This is what happens for economic development here. Update: I found out from city officials the grant was used to help pay for employee parking. But there's a free municipal parking lot about a block away. To their credit, US Solutions has done well.

The real idea is to spend government grants and money, not jobs.

Public Telecom wipes out local businesses. The first thing Bristol and Abingdon did was dump the private companies they contracted to and put themselves on their own systems. This is a backdoor subsidy and is unfair to private companies. Government here is a big part of the business community. In Bristol and Washington County, 14-18% of the employment, in the VCEDA area, 25%.

I know one Telecom (local) company that just let 10 people go due to a drop in business even before BVU comes on line. Sprint is getting ready to go after BVU just like Charter Cable did. Quoting Sprint:

the current state of the economy makes this a bad time for BVU to begin offering services. "In the telecommunications industry, there have been 70 bankruptcies, $2 trillion lost and 500,000 people have lost jobs since 2001," Sokol said. "This is not a very good time for a municipality to be getting in and doing this. I hope the people of Bristol Virginia know where their tax dollars are being spent and what could happen if this doesn't work out. I don't think cities go bankrupt, they just issue more bonds and raise taxes.

My local Internet provider, Ntelos, just filed bankruptcy. How is displacing established businesses already on shaky ground be called "job creation?" Has anyone forgotten the Telecom and the Internet bubble is what has rocked the stock market? Ntelos is back (2007) and never went out of business. Good for them, but they are not taxpayer subsidized. They did it seems in response to BVU drop my internet access from $19.95 to $9.95.

In conclusion, taxpayer subsidized Telecom and jobs in general have a dismal track record. It doesn't produce real jobs and fills the pockets of contractors and developers.

I'm not here just to make trouble. I may be putting my job at risk for what I'm doing. But the public has got to start thinking about this because one day the government may be forced to really curb the waste and God help this region then.

Updates for October 1, 2004. News of the 40% electric rate hike for January 1 comes on the heels of an announcement in August that water rate increase of 22.4 percent. Sewer rates increased by 4 percent on July 1, and municipal cable television rates rose 12 percent to 15 percent in May to cover mounting losses/costs. They are still locked in legal disputes with Sprint over cross subsidizing and have failed to create a single new job or serve under-served areas as promised. They claim their business plan is "on track." Update August 2007: BVU electric rates are cheaper than some other local competitors.

Update:Proposed bills could exempt BVUB from scrutiny. Three bills before the Virginia state Senate would exempt Bristol Virginia Utilities from certain provisions of the Virginia Freedom of Information Act. To quote, "The determination of what would fall into those categories would be left up to Bristol Virginia Utilities officials...Those whose information requests were denied would have to take the utility to court and ask a judge to determine whether the refusal was justified," according to Virginia State Senator Bill Wampler. The Bristol Herald Courier and Kingsport Times-News among others opposes this nonsense. They were defeated.

I'm joining the Herald Courier to express my deep concerns with Bristol Virginia Utilities being exempted in any form from the (Virginia) Freedom of Information Act.

At the invitation of Bristol Virginia Mayor Paul Hurley, I've been attending BVU board meetings and wish to commend Wes Rosenbalm and his staff. They go to great lengths to make sure everything is done within the law. I don't believe they're doing anything illegal. Also notable is the BVU program to help needy people with electric bills. BVU will match any donations.

BVU is an operating division of the city of Bristol and the board consists mainly of local politicians. Some also operate the economic development department housed within BVU's building. Funds are borrowed/loaned between BVU and the city government. BVU gives away assets under board direction (Red Lobster, Trainstation, library, etc.), and BVU can't be separated from city politics. Sprint doesn't borrow from the electric company or use the city attorney to handle legal fights.

OptiNet borrows from the electric company to cover losses/costs. The Optinet financial statement for May 31, 2004, shows another loss of $2.3 million and total liabilities of more than $41 million. Heavy borrowing from the electric company by Optinet (and for other costly projects around Exit 7) has led to massive borrowing by the whole utility. External debt alone is $50 million and is a factor in recent spiraling utility rates. OptiNet won't even start paying on those loans from BVU until 2005. They recently lowered credit requirements for customers (29 percent rejection rate) to up cash flow.

Sprint doesn't get economic development funds, but BVU does - receiving $3 million to $5 million in tobacco/EDA funds for fiber optic alone. They don't have a single private sector job or new business to show for it that anyone will name.

I brought this grant issue up with Sen. William Wampler and I'm dismayed we get more secrecy bills. Two earlier secrecy bills (SB280 and SB282) didn't pass. Passing this bill will block citizens, the press, etc. from getting information and must be opposed.

They keep things legal because they know they are being watched. Otherwise, OptiNet must be barred from any further loans from the electric company, BVU barred from any more tobacco/EDA grants, and have economic development completely severed from BVU and removed from their building. This will prevent corporate welfare (incentives) and asset giveaways being shifted onto utility bills. That will level the playing field for everyone.