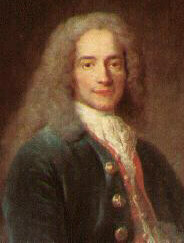 Voltaire He was an atheist, anti-Semite, hated Islam

They argue Voltaire was not an atheist, was something called a pantheist. Pantheism is simply atheism and is promoted by many so-called "modern deists" who take a strange religious view of nature. (Or treat it as divine.) Voltaire claimed to be a Deist, he was not. The God of Deism transcends nature, God is not Nature nor is Nature divine. The claim of pandeism is equally absurd.

This is merely an atheistic creation of god as an abstract principle and nothing in any real sense. Thus it's atheism. Eastern religion is also a favorite of many atheists today as it was with Voltaire. Many of those of the French Enlightenment attempted to replace Christianity with pagan Greek philosophy. Voltaire was an elitist and hypocrite.

Voltaire has written of "tolerance," but was totally intolerant of Christians and was a rabid anti-Semite. So "tolerance" applied to anything but Christians and Jews. That's pretty much where radical Humanists are at today.

The Humanist French Revolution gave us the gelatine and state sanctioned murder. Paul Kurtz of the Humanist Society called Marx "the greatest humanist of the 19th Century." Humanist philosophy later gave us the gulag and gas chambers.

In the New York Times (September 30, 1990) to quote Arthur Herzberg on the question of Voltaire's Anti-Semitism:

...He was at war with both Judaism and Christianity. He wanted to purge all men, of whatever persuasion, from these superstitions in order to make them enlightened. In a book published more than 20 years ago, in 1968, entitled "The French Enlightenment and the Jews," I argued against this construction. An anti-Semite of the most damaging kind is one who asserts that, no matter what Jews might believe, their inherent character is fixed - and nasty.

In the book, I cite dozens of passages from the whole corpus of Voltaire to the very end of his life, more than a decade after he had made his brief bow to de Pinto. Two citations will suffice. In his "Letter of Memmius to Cicero" (1771), Voltaire, in the pose of an ancient Roman reporting on the Jews, wrote:

"They are, all of them, born with raging fanaticism in their hearts, just as the Bretons and the Germans are born with blond hair. I would not be in the least bit surprised if these people would not some day become deadly to the human race."

In the next year, writing the essay "One Must Take Sides" - introduced as "the last word by Voltaire on metaphysics" - he ridiculed each of the major religions, but he was meanest to the Jews:

"You have surpassed all nations in impertinent fables, in bad conduct and in barbarism. You deserve to be punished, for this is your destiny."

This is hardly the rhetoric of a man who thinks that Jews are just another people waiting to be enlightened. It is the talk of a "noble Roman," his favorite self-definition, who has no patience with inferior people such as Jews and, for that matter, blacks.

The defenders of Voltaire have continued to argue that he was not personally an anti-Semite but only guilty of some rhetorical excesses. That is not how those who were arguing for and against the emancipation of the Jews, both in his own time and in the next several generations, read him.

Jacobins such as Jean Francois Rewbell in the 1790's and the socialist Pierre Proudhon in the next generation are among the many figures, especially of the left, who justified their arguments against the Jews by quoting Voltaire.

Such figures were not quarreling with Judaism; they were attributing innate wickedness to the Jewish character. This is racist anti-Semitism. Such opinions helped open the door to the horrors of our century.

The rest is from Wiki with my comments:

Pantheism ( Greek 'pan' = all and 'theos' = God, it literally means "God is All" and "All is God".) is the view that everything is of an all-encompassing immanent abstract God; or that the Universe, or nature, and God are equivalent.

More detailed definitions tend to emphasize the idea that natural law, existence, and the Universe (the sum total of all that is, was, and shall be) is represented in the theological principle of an abstract 'god' rather than a personal, creative deity or deities of any kind. This is the key feature which distinguishes them from panentheists and pandeists.

As such, although many religions may claim to hold pantheistic elements, they are more commonly panentheistic or pandeistic in nature. (These terms are modern inventions. An abstract god is the same as an abstract ham sandwich: they don't exist. Thus an abstract notion of God is atheism.)

Voltaire, though often thought an atheist, did in fact partake in religious activities and even erected a chapel on his estate at Ferney.

The chief source for the misconception is a line from one of his poems (called "Epistle to the author of the book, The Three Impostors") that translates to: "If God did not exist, it would be necessary to invent Him."

The full body of the work, however, reveals his criticism was more focused towards the actions of organized religion, rather than with the concept of religion itself.

Like many other key figures during the European Enlightenment, Voltaire considered himself a Deist. (Note: he stripped all religious elements from Deism reducing it to near atheism. He didn't follow Deism as he found it in England, he perverted it.)

He did not believe that absolute faith, based upon any particular or singular religious text or tradition of revelation, was needed to believe in God. (He redefined God.) In fact, Voltaire's focus instead on the idea of a universe based on reason and a respect for nature reflected the contemporary Pantheism, increasingly popular throughout the seventeenth and eighteenth centuries and which continues in a form of deism today known as "Voltairean Pantheism." (Pantheism is atheism - deism is not atheism - this was inserted on Wikipedia and is false. 'Respect" for nature is often worship of nature.)

He wrote, "What is faith? Is it to believe that which is evident? No. It is perfectly evident to my mind that there exists a necessary, eternal, supreme, and intelligent being. This is no matter of faith, but of reason." (That being as he defines it is Nature, thus the material world is all that exist and it has been redefined as God. It's still atheism.)

In terms of religious texts, Voltaire was largely of the opinion that the Bible was 1) an outdated legal and/or moral reference, 2) by and large a metaphor, but one that still taught some good lessons, and 3) a work of Man, not a divine gift.

These beliefs did not hinder his religious practice, however, though it did gain him somewhat of a bad reputation in the Catholic Church. It may be noted that Voltaire was indeed seen as somewhat of a nuisance to many believers, and was almost universally known; Wolfgang Amadeus Mozart wrote to his father the year of Voltaire's death, saying, "The arch-scoundrel Voltaire has finally kicked the bucket...."

Voltaire was also critical of Muhammad. His play Fanaticism, or Mahomet was "written in opposition to the founder of a false and barbarous sect"; he also referred to Muhammad as "a false prophet." However, his views on Islam were more favorable. He called him the founder of "a wise, severe, chaste, and humane religion", and also said "The legislator of the Muslims, a terrible and powerful man, established his dogmas with his valor and arms; yet, his religion became benign and tolerant."

From translated works on Confucianism and Legalism, Voltaire drew on Chinese concepts of politics and philosophy - which were based on rational principles, to look critically at European organized religion and hereditary aristocracy. (Note that Voltaire was a hypocrite in that he lived off the largess of the same aristocracy he attacked.)

Voltaire also displayed, as part of his Dictionnaire philosophique, an inclination towards the ideas of Hinduism and the works of Brahmin priests, asking, "Is it not probable that the Brahmins were the first legislators of the earth, the first philosophers, the first theologians?" His attitudes towards religious institutions are further shown in the criticisms he made of Christian missionaries in India.

Voltaire was initiated into Freemasonry one month before his death. On 4 April 1778 Voltaire accompanied Benjamin Franklin into Loge des Neuf Soeurs in Paris, France and became an Entered Apprentice Freemason.

Note: in other words he was not really a Freemason, which requires a belief in God.

What does Daniel Pipes have to say about the two political parties?

I vote Republican because I support the party's core message of individualism, patriotism, and respect for tradition, in contrast to the core Democratic message of dependence, self-criticism, and "progress." I am inspired by the original reading of the U.S. Constitution, by ideals of personal freedom and American exceptionalism. I vote for small government, for a return of power to the states, for a strong military, and an assertive pursuit of national interests.