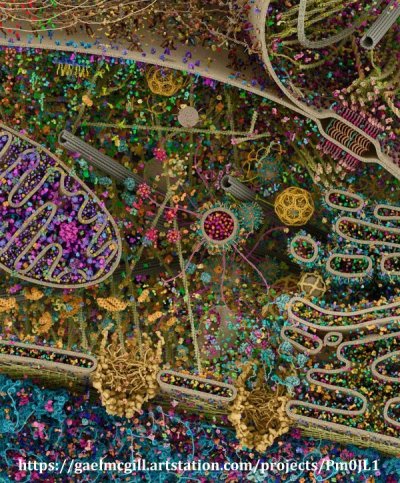 Was the above living cell due to random chance?
Webmaster Homepage

Pandering will sink us, will weaken our foundations and our unique culture; a culture of tolerance yet of logic, of equality but also of independence.

It is not the American way to become more like Saudi Arabia or Iran. There they have public dress codes, Shariah law and other niceties like stonings, beheadings and honor killings. Ours is a modern society based on humanistic behavior, on accommodating the individual - not serving the Sheik, the Imam, the police or local thugs.

Here we protect and nurture the individual, not subvert our freedoms in the service of the "greater good" as defined by Allah's unblemished representatives here on earth, or by a dictator's goons, as the case may be.

When the Irish, the Jews, the Indians and the Hindus applied for jobs, they chose their workplace and accommodated to the rules accordingly. When was the last time a Hasidic Jew with full length black coat and fur hat demonstrated outside Miami City Hall for the right to wear their preferred dress in any job of their choosing?

When did Hindus demand new cafeterias to accommodate their dietary needs? When did Mormons require separate prayer facilities or Buddhists their temples? What of vegetarians, anorexics, Rastafarians?

Now Disney must accommodate the Hijab. And what if these Hijabs morph into the Taliban style Burkas? Why do the needs of the wearer, to hide all but the eyes, trump the sensitivities of the paying public, the understandable focus of the employer? Why does the Islamic disdain of certain Minnesota taxis for dogs and alcohol take precedence over the cab rider's normal and standard needs?

Why install at our universities footbaths, Shariah compliant toilets, Hallal cafeterias and private prayer areas for a vociferous minority when every other minority (and there are many indeed) managed for decades in peace and mutual tolerance without demonstrations or violence? How many businesses can afford 5 prayer breaks a day?

The religious Jew prays comfortably before and after work. Christians, Bahai, Buddist and the majority of Muslims meld rather than seek to dominate or separate?

I suspect the difference is either insecure or exaggerated victimization or possibly an imperialistic belief in religious and cultural domination.

The truth is that whether a Muslim is a radical fanatic or merely strongly Shariah compliant and traditionally observant, many committed Muslims today would prefer Sharia law to have a stronger role in our laws, our mores and our social structures.

They would prefer Islam to become the dominant or the sole World religion, for the Muslim Caliphate to once again reign supreme.

They believe, as their dominant version of the Koran is clearly interpreted across the Muslim world, that their God is the only God, that their way is the only way and that domination is their right and their goal, whether by creeping Shariah, by internal change of their adopted country or by violent Jihadism.

This is not personal conjecture - this is the current predominant Wahabi view as exported by much of the mosques and madrassas worldwide, courtesy of our Saudi friends who have spent more than 2 billion dollars annually on their outreach program. Ahmadinejad's version of his own Shia caliphate (world domination) is not difficult to discern.

This essential difference of our time is not well understood by the West. In the past, various cultures and religious expressions were happy to share the world with all others, a certain "live and let live" tolerance, where multiple paths lead to God, many lifestyles to happiness. Just honor my boundaries and I will in turn honor yours. No longer.

The new imperialism is no longer British riflemen marching into the Punjab, or Catholic missionaries and Spain's armies devastating the Indians of the South and Central Americas.

No, the new imperialism is as insidious as it is subtle. It uses our laws, our freedoms, our delicate tolerances and passionate fair play to open our societies to all, to endlessly accommodate all, even those who would subvert, dominate and abuse our world and all its largely moderate citizens.

We should draw a line in the sand and say, enough. Why allow our hard earned freedoms and unrivalled refinements to be subverted by the fundamentalisms of the 7th century Middle East?

For those who love and respect our freedoms we welcome you, members of all faiths, all religions, all cultures - for those who wish to push us back into the Dark Ages, we invite you to return to those dozens of countries, those nonexistent democracies, that practice these inanities, that specialize in the subjugation of women, the subversion of the individual.

We have freedoms worth fighting for, worth preserving. And many, hopefully more with time, are prepared likewise to do so. We should be a beacon for all the unfree, the abused, the disenfranchised. We already have a surfeit of tolerance in the West - we need to ensure our privileges are preserved and then shared more freely, more visibly amongst all those countries where freedom remains just a distant mirage.