See Dissecting Deism Past and Present

Another Look at Religion in America 2008

The AP article Religious Americans: My faith not only way was featured in the Kingsport Times-News June 24, 2008. The headline reads, "70 percent of Americans with a religious affiliation said they believe many religions can lead to eternal life, and 68 percent said there is more than one true way to interpret the teachings of their own religion." This article was clearly aimed at Christians and I believe as an attack. I went to the study myself the article was based on and found their conclusions false.

Roger Oldham, a vice president with the executive committee of the Southern Baptist Convention, bristled at using the word "tolerance" in the analysis. "If by tolerance we mean we're willing to engage or embrace a multitude of ways to salvation, that's no longer evangelical belief," he said. "The word 'evangelical' has been stretched so broadly, it's almost an elastic term."

Others welcomed the findings. "It shows increased religious security. People are comfortable with other traditions even if they're different," said the Rev. C. Welton Gaddy, president of the Interfaith Alliance. "It indicates a level of humility about religion that would be of great benefit to everyone." 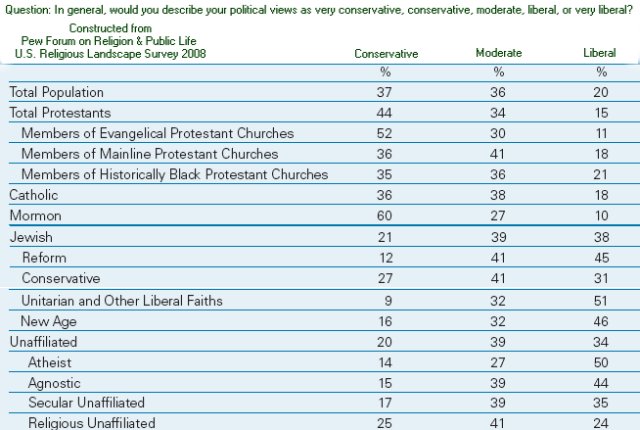 Another look at Pew

The survey left out the Orthodox, the fastest growing sect and the only one really Jewish in more than just name.* They make up 20% and the other two branches, like "Mainline Protestant" and "liberal" Christian groups in general are in steep decline. This is no surprise when many don't function as a "House of God" and tend to be a social club following only the "social gospel" or pursue "social justice." Why would a non-church survive as a church?

This problem of not even knowing what the question means was revealed when self-proclaimed atheists believed in God, some even certain of it. (Perhaps they are agnostics?) By any definition of atheism they can't be atheists. As for their claims about Muslims, it turn out that came from a differing study that seemed aimed at "assimilated" Muslims and the advisors they listed are known Islamist' terrorist supporters, which they also seemed to have lumped in Nation of Islam, a black, racist' hate group. Other Muslims claim they are not Muslims.

For example Mainline and Evangelical Protestants are nearly equal on wanting smaller government at 48% to 51% respectively. The extremes in wanting bigger government are Black Churches at 72% and Muslims at 70%. When it comes to political ideology, Evangelicals tend towards conservative (52%) versus Mainline that tend towards Moderate at 41%. So the question come back to where did Pew stick those somewhat conservative and somewhat liberal in relation to moderate?

A big gap between Mainline and Evangelical churches is whether government should do more to protect morality. The 33% of Mainline wanted more, while 58% less. Evangelicals 50% wanted more government protection of morality, 41% less. They aren't that far apart.

In the case of Blacks and Muslims on the same issue, blacks were nearly identical with Evangelicals at 48% more and 42% less. In the case of Muslims, 59% more, 29% less. Those groups desiring the least government protection of morality are those leaning towards atheism/Humanism: Jews at 71%, Buddhists at 67%, "other faiths" (so-called Unitarians, atheists, agnostics, New Age, etc.) at 75%. These "atheist" leaning groups no surprise believe the Bible is a work of man. These "atheist" leaning groups are also heavily liberal and Democratic.

It is also interesting to note that according to the NJPS 2000, although only 46% of US Jews belong to synagogues, that minority divides up 39% Reform, 33% Conservative, 21% Orthodox and 7% Other. If synagogue affiliation continues to be an important "bell weather" of the denominational forecast for the years ahead, Orthodoxy is capturing a growing market. More specifically, between the ages of 18-34, 34% of Jewish adults who are synagogue members have chosen to belong to an Orthodox synagogue. Ref. http://www.conservapedia.com/Orthodox_Judaism

From a local writer

The story "Religious Americans: My Faith Not Only Way" June 24 is well worth heeding for those concerned about the hereafter. It reports on a recent Pew survey showing that 70 percent of religious Americans believe many religions can lead to eternal life while 68 percent believe there is more than one way to interpret the teachings of their own religion.

While the survey mentions other faiths, it is clearly focused on those who claim to be Christian and, as a 74-year-old Christian, I concur with the survey's findings, if not the opinions expressed by the respondents. Is it any wonder that the institutional church in America has lost its power to serve as the nation's moral compass? The first group described above stands in stark contrast to the clear teachings of Jesus Christ, the very one it claims to worship, and the second would deny Peter's proclamation: "But know this first of all, that no prophecy of scripture (i.e., the Holy Bible) is a matter of one's own interpretation." In short, the Bible means what it says irrespective of any person's opinion in that regard.

Assuming the accuracy of the survey, it would appear that a majority of professing Christians don't take their faith seriously enough to study the Bible and come to a knowledge of the truth. They should realize there is only one way to eternal life, and it is through neither a religion nor any other set of rules and regulations. Rather it comes only through an abiding, personal, intimate relationship with Jesus Christ.