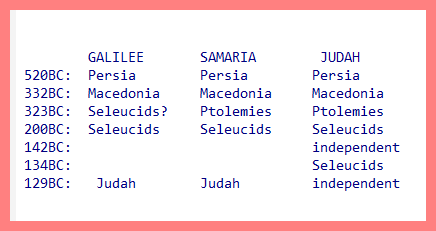 The early Jews were not monotheists, but followed henotheism or even outright polytheists. They had one central god but believed in other gods. "Thou shalt have no other gods before me" (Exodus 20:3) indicates the belief there was other gods. This was the tribal god, often bloodthirsty and murderous who (they claimed) ordered the killing of women and children including the first born of Egypt. Every tribe seemed to have their own god. This was no God of love or compassion, but a god of survival.

True monotheism would come later. In Isaiah 43:10, "Ye are my witnesses, saith the LORD, and my servant whom I have chosen: that ye may know and believe me, and understand that I am he: before me there was no God formed, neither shall there be after me..." (KJV)

This servant was Isaiah. Another servant is revealed in Isaiah 44:28, "That saith of Cyrus, He is my shepherd, and shall perform all my pleasure: even saying to Jerusalem, Thou shalt be built; and to the temple, Thy foundation shall be laid..."

And this statement in 45:1, "Thus saith the LORD to his anointed, to Cyrus, whose right hand I have holden..." Cyrus was the "anointed" or savior of Israel. Cyrus was a Zoroastrian. With the great Persian King Cyrus we have the first real monotheistic declarations in the Bible. This is the first expression of universalism. Isaiah also first introduces the idea not of false gods, but only one god period.

For example we can do word search and terms such "holy ghost" never do appear and Holy Spirit rarely appears at all in the Old Testament, but 89 times in the New Testament. This is an ill-defined form of pseudo-pantheism that may have originated with Hellenistic (Greek) pantheism.

God became a universal God of love: good, perfect, more remote, and identical to Ahura Mazda. It would be the missions of Nehemiah and Ezra backed by the Achaemenian (Persian) Imperial Governmental authority to make the Jews conform to more than just the new ideal of monotheism.

Over half a century later we arrive at the Achaemenian King Artaxerxes whose name also appears in Hebrew Scriptures of Ezra (verses 7:7, 7:12). Artaxerxes followed the tradition of benevolence towards the Jews as set by his ancestors. He appointed Nehemiah one of his loyal servants to govern Jerusalem.

Ezra had been born and educated in Babylon and was also sent by Artaxerxes to see if the people of Judea "be agreeable to the law of God" and "to teach in Israel statutes and ordinances" (Ezra 7:10-11), "For Ezra had prepared his heart to seek the law of the LORD, and to do it, and to teach in Israel statutes and judgments...Now this is the copy of the letter that the king Artaxerxes gave unto Ezra the priest, the scribe, even a scribe of the words of the commandments of the LORD, and of his statutes to Israel..."

In Ezra 4:7, "And in the days of Artaxerxes wrote Bishlam, Mithredath, Tabeel, and the rest of their companions, unto Artaxerxes king of Persia; and the writing of the letter was written in the Syrian tongue, and interpreted in the Syrian tongue..." Everything was being done in Aramaic the official language of this part of the Persian Empire. By the first century when Jesus was born, everyone spoke Aramaic while Greek had become the language of commerce. Hebrew had been relegated to the Temple.

There are explicit indications of widespread religious conversion in Ezra 6:19-21 and Nehemiah 10:28-29, but why would Jews have to convert to Judaism? Nehemiah, chapter 8, discusses an event where Ezra read from the book of law which neither Hebrew speakers nor Aramaic speakers could understand - the words had to be translated by priests.

Ezra's major reform was the prohibition of foreign wives. Although marrying foreign wives had always been the most favored Jewish practice (including Moses), such marriages violate Zoroastrian law. The reality is better expressed in Judges 3:5-6, "And the children of Israel dwelt among the Canaanites, Hittites, and Amorites, and Perizzites, and Hivites, and Jebusites: And they took their daughters to be their wives, and gave their daughters to their sons..." There is no proof of any mass slaughter in Canaan and the "other gods" may have been edited in later.

When the Babylonians conquered Judah, they exiled the royal family, aristocrats, and upper classes. Most of the common people were left behind. When the 40,000 or so returned (many stayed behind in Babylon), they rejected those they found that had intermarried with others. They still considered themselves Jews. Nonetheless, the returning exiled Jews separated themselves from others who became the Samaritans. Strife began at once and divided the nation.

We are told Nehemiah, who followed the Zoroastrian purity code rigidly, was responsible for the transition of the Jewish purity code. The purity laws were no longer restricted to the Temple, but had to be exercised in 'the fields, the kitchen, the bed and the street (Boyce, History of Zoroastrianism Vol. II, p. 190). Others claim Ezra also introduced the new festival of booths (Nehemiah 8:13) in the seventh month, which was the Zoroastrian holiday of Ayathrem.

The Persian King Darius is our hero in the Book of Daniel.

Sometime around or after 400 B.C.E. the Old Testament was put in written form while Jerusalem was still under the control of the Persians. This seems to make sense and one can bet it fit the official version of events, but as usual scholars can't agree.

Jews did keep circumcision, which doesn't exist in Zoroastrianism.

To summarize this section, Judaism was influenced by Zoroastrianism and in my opinion both were close enough to exchange ideas. Judaism became true universal monotheism while rejecting the Devil. Some individual sects such as the Essenes accepted the devil. This sect seems to be the closest to that preached by John the Baptist and Jesus.