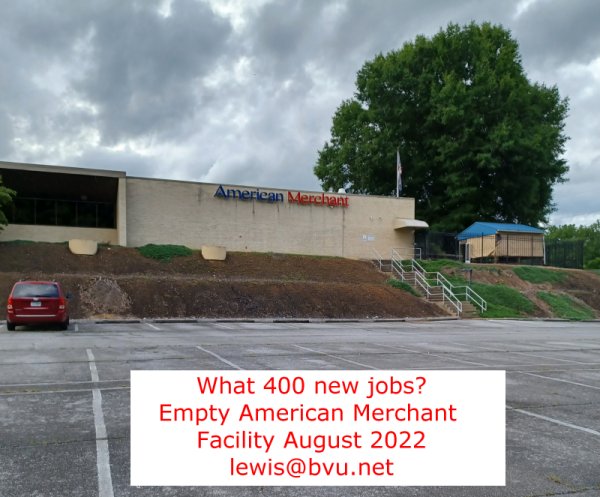 Update August 2022. After almost five years of promises the promised 400 jobs turned out to be about zero. Millions in corporate welfare, more broken promises.

There is no evidence of anything going on at this location. I have left messages in the past trying to contact somebody, zilch.

BHC Dec. 8, 2017 reports that a single tractor-trailer load of product has been shipped to retailers. They will use 300,000 gallons of water a day. A $2.5 million "state of the art" water treatment system - paid for by the public - will treat their waste water.

They claim to be hiring workers, but fail to specify pay, etc. This will be nowhere near the high paying union jobs shipped to Mexico by Ball.

At this point the warehouse is not even set up. And any future jobs are dependant on demand. Management refused to even reveal what stores are getting their product.

I believe the promised jobs are way over inflated - again. They are currently operating 24 looms with 50 workers and maximum looms will be 48. The numbers doesn't add up.

The corporate welfare is now running into the millions and we get 50 jobs, not 400.

One can bet whatever happens the public money is gone. They never enforce these agreements.

Now the plant will get a new owner. To quote the State of Virginia:

"The Bristol plant now is owned by American Merchant, a newly formed company that is a subsidiary of Hong Kong-based Merchant House International Ltd...American Merchant is investing $19.9 million to convert the plant for the production of embroidered hand and bath towels."

I saw this on local television where a Chinese lady seemed unsure of what her company was really going to be doing. They said 200 jobs there I think.

American Merchant also is eligible to receive additional grants and state benefits from the Virginia Enterprise Zone Program and Appalachian Regional Commission, both administered by the Virginia Department of Housing and Community Development."

What is really going on here? Again no public access to all of this closed-door wheeling and dealing with public assets.