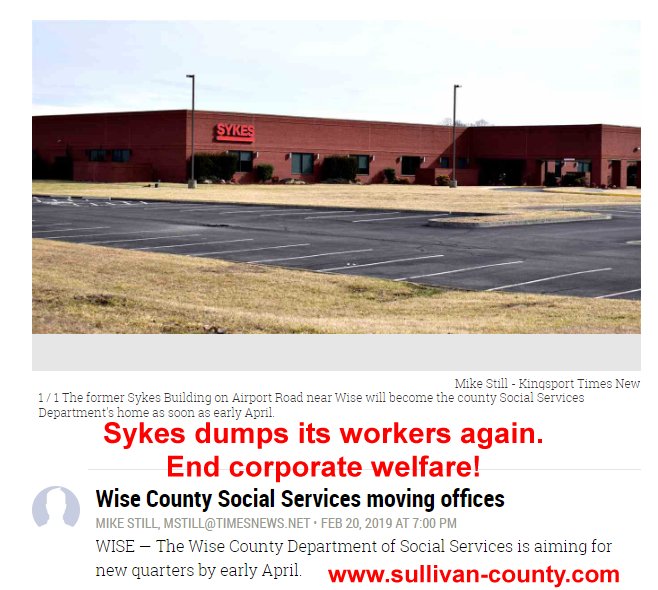 At least 324 jobs to be lost as Sykes consolidates sites

The announcement yesterday by the Florida-based company came less than seven months after Sykes also shut down an identical operation in Hazard, pulling the plug on 393 jobs. Sykes' plans appeared to surprise both state and local officials yesterday as Pikeville employees said they were told, in small groups, the company's $1 million red-brick office building, 4 miles south of Pikeville on U.S. 23, will close April 10.

"Due to client needs and changing market conditions, Sykes has decided to consolidate locations," company spokeswoman Andrea Burnett of Tampa said in a statement. "This will result in a closure of the Pikeville location."

Sykes contracts with Internet companies to assist computer customers in at least 13 different countries. At one point in July 2000, the company employed up to 1,050 workers in Eastern Kentucky: 700 in Pikeville, 350 in Hazard, company officials have said. The move from Pike County will leave Sykes with only one company in Kentucky. Burnett said yesterday the company has no plans to close the Morganfield plant "at this time."

Burnett declined to elaborate or answer any additional questions, but denied allegations by two employees who said their jobs were being moved to a Sykes operation in the Philippines. "That's not true," she said. "They were not told that by Sykes." In December, however, Sykes officials did announce plans to expand its "global footprint" into San Salvador, El Salvador, starting with 400 new jobs.

Workers and local officials described yesterday's announcement as both jarring and infuriating. "What am I going to do?" asked Tabitha Blackburn, 21, of Allen, who is majoring in computer science at a local community college. Blackburn said she began work at Sykes nine months ago, making $6.75 an hour and is now being paid $7.15 an hour. "Now I've got to figure out how to get another job, pay for my car and raise my little girl," she said. "It's not fair, taking jobs away from us and taking them overseas just because they can pay them less."

Nearly five years ago, former Gov. Paul Patton welcomed the call centers. "This allows us to market the intellectual capacity of our people, rather than manual labor," Patton said. "This will give our children an opportunity to stay here."

Patton could not be reached for comment last night. Pike Deputy Judge-executive Karen Sue Ratliff did not blame Patton or Gov. Ernie Fletcher for the company's pulling out of the county. Sykes "made promises to us to get our money and they don't honor their commitment," she said. "I don't care who marketed the deal. You can't make people be honorable."

Hugh Haydon, commissioner for regional development in the state Economic Development Cabinet, said Sykes had notified his agency last year when it closed its Hazard office, but not this time. In Pikeville, Sykes received almost $4 million from Local Government Economic Development funds, including coal taxes, for training and also received a five-year property tax abatement, which Ratliff said would be ending "pretty darn close to now."

Courthouse records show Sykes has paid a 2003 tax bill for $17,094 on its Pike County property, assessed at $1.9 million; Ratliff was not assuaged.

"I just wish they had given us a call and we could have sat down and talked," she said. "We've already made a tremendous investment and I hate to just see it gone." Joseph Rose, 24, of Elkhorn City, a full-time college student, has experienced ups and downs during his three years working for Sykes. In the beginning, the company offered good benefits, he said, but reduced them as business decreased. "For a while, we were down to 28 hours (a week)," he said. Then a new software client boosted business to a point where workers took half-hour lunch breaks while the company sent out for pizza, he said.

He said the Pikeville office has three major clients that generally pay the company $21.75 for each call it fields from computer customers. "I average 30 calls a day myself, so you can figure how much profit is coming out of here. And they've got 26 localities in the U.S. alone."

But Sykes Enterprises has suffered from declining revenues and from restructurings involving its U.S. and European operations, company financial reports indicate. Sykes earned $46.8 million, or $1.13 a share, in 2000, but in 2002, the company lost $18.6 million, or 46 cents a share. Sykes is scheduled to report its 2003 earnings Feb. 24, but it appeared to be recovering during the first nine months of last year. Earnings totaled $6.67 million during that period. Burnett would not discuss Sykes' payroll in Pikeville, but indicated it had benefited the region.

Pikeville city manager Donavan Blackburn, whose son works at Sykes, calculated that with 400 employees being paid an average of $7 an hour -- the office operates from 8 a.m. until midnight -- the company's Pike County payroll is about $6.5 million a year. "It's sad," Blackburn said, "The technical field in this area is limited, anyway. Sykes provided jobs and gave some of our brightest young people a place to start their career here -- and remain here."

Sykes will be adding 350+ and approximately 30 management positions in Wise, VA. The Wise, VA site has recently celebrated their 5 year anniversary, due in part (according to our local congressman) to the excellence of the local work force. Sykes Enterprises is a multinational call-center company lured to Eastern Kentucky by millions of dollars in state tax incentives, had closing its large Pikeville office after five years, costing Kentucky at least 324 jobs in 2004. It wasn't stated what subsidies (if any) Sykes received this time in Virginia. Pikeville is a short drive across the Kentucky state line from Wise. Ref. Bristol Herald Courier June 12, 2005

In the end taxpayers shelled out $10 million in various forms of corporate welfare to move call centers one after the other into Clintwood, Virginia. The number of jobs never exceeded 250 at any time while they will claim to this day they "created" over 1100 new jobs. In the end they moved in a government contractor called S.I. International (they have changed hands since) and claim 130 jobs today. The typical call center job in this region pays $8-$9 dollars an hour. The Pikeville call center never reopened and was shut down for similar reasons.