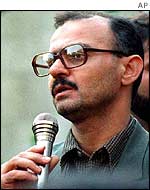 The Fight for Democracy in Iran and a salute to heroes

President Bush claims to support democracy in Iran, but really doesn't. He couldn't care less about the typical Iranian because all he sees is oil and contracts for his big business friends. In 2006 he publicly supported Israel in their counter-attack on the Iranian backed Hezbollah terrorists in Lebanon. But Bush didn't care about Israel either and tied their hands in crushing the terrorists. Bush only wanted to hurt Iran, not help Israel.

Unlike George Bush who consults Saudi Arabia on everything, a brave college professor named Hashem Aghajari stood up for what he claims is true Islam and the right for Muslims to examine the Koran for themselves.

Daring to suggest equal treatment for non-Muslims and women, and calling the ruling clergy "monkeys," Aghajari rightly claims "we don't need mediators between man and God." For that he is threatened with death. One outraged "monkey" had this to say,

"Today, those who spread slogans such as reform, liberty, political development, democracy, human rights... are fighting [the] religion [of Islam], and... with their demonic and colonialist theories, [they] call for separation of religion and state or support people who pursue these principles.

TEHRAN (Reuters) - Hardline Islamic militants, some carrying assault rifles, patrolled streets early on Monday near a Tehran University dormitory that has been the focal point of six nights of pro-democracy protests...Three gunshots rang out at one point but...witnesses said the atmosphere was much calmer than on previous nights when hardline vigilantes wielding clubs, chains and knives had attacked the demonstrators.

By 2.30 a.m. (6 p.m. EDT on Sunday) streets around the campus were virtually empty of cars and pedestrians as the heavy security clamp-down appeared to be paying off for the authorities. The protests, which have included unprecedented insults hurled at Iran's clerical leaders, have been welcomed by Washington as a cry for freedom...

Local residents are joining what started out as student protests against fundamentalist clergy and their armed thugs. The Iranian people are fed up with lies, poverty, and misery that rabid perversion of Islam has brought on them. The make-believe democracy of Iranian President Mohammed Khatami isn't working any more. They've opened the door to democracy with a theocracy much like the Puritans of America once did. But the people want real freedom and the latest round has been raging for over a week.

In an apparent effort to defuse the protests, police have arrested several ringleaders of the pro-clergy vigilantes who terrorized protesters in Tehran two nights ago, smashing car windshields and beating people with bars and chains. Police chief Brig. Gen. Mohammad Baqer Qalibaf told IRNA 109 "hooligans" were arrested. No students were detained, he said.

Residents near the dormitory, where the protests began last week, said they heard three gunshots early on Monday. "As soon as I heard the shots I rushed out of my house to see what was happening. But I couldn't see anything," said one 19-year-old man, who refused to give his name.

Dozens of hardline militants, recognizable by their beards, untucked shirts and trademark clubs and chains, walked between lines of cars, searching some and threatening drivers who dared to honk their horns in a sign of support for the protests.

But the menacing presence of the vigilantes prevented people from gathering to chant slogans against Iran's clerical leaders as occurred on the first few nights of demonstrations.

In June 2003, against a backcloth of pro-reform demonstrations in Tehran, Hashem was reported to be among 250 intellectuals who issued a strongly-worded declaration accusing the ruling clerics of setting themselves in the place of God. He was charged with blasphemy, insulting Islam and questioning clerical rule. A court convicted him and condemned him to death. Near riots and protests broke out.

In July 2004, he was convicted of the lesser offences of insulting sacred Islamic tenets. The court sentenced him to three years imprisonment, and a further two years suspended. During his trials Mr Aghajari defended the cause of democratic reform and denounced hardline clerics, whom he accused of suppressing freedom in the name of Islam. Professor Aghajari's lawyer, Saleh Nikbakht, said that scores of friends and supporters of the professor had offered to pay the bail.

Dr Hashem Aghajari the university professor twice condemned to death for blasphemy was released, July 31, 2004 after two years of legal battles with judges and mass demonstrations by students. He said as he emerged from prison. I hope that freedom, justice and human rights will be realised. I hope that all prisoners of conscience who have committed no crime will be released soon. I am so happy to be among people again. I am happy that the truth has prevailed. I pray for the victory of the Iranian nation". 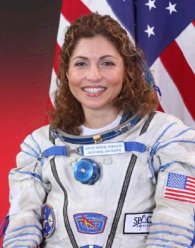 Anousheh Ansari is the first Iranian-American in space

Born on 12 September 1966 in Iran, Anousheh and her family escaped in 1984 to the United States. Today she is fluent in English, French and her native Persian, has a wall full of engineering degrees and awards, is a millionaire, and astronaut. On the September 18th, 2006 she lifted off from Kazakhstan for 10 days aboard the International Space Station.

Asked what she hoped to achieve on her spaceflight, she said, "I hope to inspire everyone, especially young people, women, and young girls all over the world, and in Middle Eastern countries that do not provide women with the same opportunities as men,to not give up their dreams and to pursue them...It may seem impossible to them at times. But I believe they can realize their dreams if they keep it in their hearts, nurture it, and look for opportunities and make those opportunities happen."

On September 16th in an interview on Channel 4 of Iran national TV, she "called for people to witness how hard work and aspiration makes seemingly-impossible possible. She urged women and men to think free and let their imagination show the way to achieve, with an open mind." That must have made the mullahs cringe.

On her spacesuit, Anousheh intended to wear the U.S. flag and the version of pre 1979 Iranian flag, to honor the two countries that have contributed to her life. Russian and U.S. governments said no, she will wear the Iranian colors instead. Click here Ref. Wiki 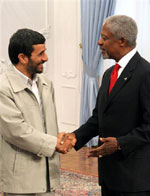 Yet the leftist press and political correctness struck again. None of the Iranian flag business was correctly reported in most of the liberal media. Typical is this from AFP September 15, 2006:

And although her life now is a far cry from her origins in Iran, Ansari says she has not forgotten her birthplace, widely known for its hostility to the United States. At her Star City news conference she sported the flags of both Iran and the United States on her spacesuit. "I felt that by wearing the two badges I can demonstrate that both countries had something to do with making me the person who I am today."

She didn't wear the Islamist Iranian flag, just the colors. Click here The leftist UN and the Islamic hell that imprisoned Hashem Aghajari had nothing to do with her success. Freedom, democracy, secularism, capitalism, and her own hard work was her key to success. In other words, being an American.

The Islamist flag of today.

But if Anousheh lived in Europe or countries such as Italy, hurting Muslim feelings over a flag could send her to prison. Italian journalist Oriana Fallaci was to face trial for allegedly insulting Islam in her book The Force of Reason. An earlier book The Rage and the Pride, published two weeks after the 11 September attacks, sent Islamic apologists into fits. In that book she said Western culture was superior to Islam and Muslim immigrants had "multiplied like rats".

According to her lawyers before a French court, "At the heart of her thinking is the following reasoning: the fight against Islamic terrorism is made more difficult by intellectual terrorism cloaked in anti-racism." That book was published about 24 hours after the March 11, 2004 train bombings in Spain. Fallaci argues that Europe is turning into "an Islamic province, an Islamic colony" and that "to believe that a good Islam and a bad Islam exist goes against all reason."

The Italian judge charged her because her words were "unequivocally offensive to Islam." The Muslim Union of Italy sued the her on April 8, 2004. Fallaci lived in New York and was a Resistance fighter in World War II and a former war correspondent. She died September 15, 2006 at age 77. (I wonder if the Pope is next?)

Freedom Of Expression Is EU's Firm Principle: ANKARA - "Freedom of expression is European Union`s firm principle. We are not conducting any bargaining with Turkey on this matter," said Olli Rehn, EU Commissioner for Enlargement, on Wednesday...Rehn stated that in other European countries there are no laws that make it a crime to insult a certain nationality..."

While this relates to Article 301 of the Turkish Penal Code that limits freedom of expression, it seems the many laws in Europe protecting Islam from open criticism is absurd. 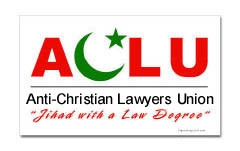 Where is the Left and the Secular Humanists?

Edward W. Lempinen says, "Progressives have lots of arguments against the war on Iraq -- some of them compelling. But why aren't they burning to free Saddam's oppressed masses?" Better yet, he asks where's the outcry to support democracy in Iran. His answer is simply, " a form of paralysis."

But Rabbi Spero tells just what a leftist Lempinen can't say, "the left is not guided by motifs of liberty, freedom and human rights, but anti-Americanism and international socialism."

Read See No Evil and Anti-Americanism: Opiate of the left.

Journalist dies after arrest in Iran; family can't get answers

Montreal-based photojournalist Zahra Kazemi was arrested by the Islamic Republic as she photographed families demonstrating outside the notorious Evin prison in northern Tehran in protest at the arrests of pro-democracy students. She was murdered and her family and the Canadian government are still demanding answers.

Reaction from a British "secular humanist"

This website was contacted by Alex, a person that descibes himself as "a secular humanist" and claims this website hates Muslims. He has proven the total lack of reason displayed by so many Europeans. His reaction to the murder Zahra Kazemi when I brought the subject up is as follows:

...and deaths of Iraqi or Afghani civilians by the hands of American/British troops simply don't happen? Really, from a country whose war cry was 'shock and awe', I really don't think you're best placed to point fingers...

The family of Zahra Kazemi and many other reformers face this every day from so-called western "human rights activists" that refuse to support them. Again I will quote, "the left is not guided by motifs of liberty, freedom and human rights, but anti-Americanism and international socialism." Special thanks to Alex for sharing his insights on Zahra.

For the most part "secular humanists" (atheists) and the political left are often the same. There are exceptions, and those secular types free of leftist irrationality, accept my apology. This isn't about you.