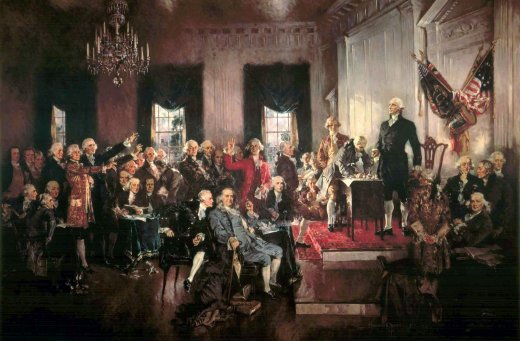 Democracy and the Origins of the US Constitution

All of these ideas about democracy originated from a number of sources. But things are not that simple. To quote another source,

Democracy can be understood as having at least two dimensions: 1) self-government, that is to say, meaningful participation of individual citizens in the establishment of the polity in which they live and in its subsequent governance; 2) pluralism, that is to say, the right of every individual to develop for him or herself a way of life and a set of beliefs and opinions appropriate to it, consistent with agreed upon common norms, and to live accordingly, with minimum interference on the part of others, including and especially, on the part of government.

Both of these dimensions combine issues of liberty and equality, the twin pillars of democracy. Neither self-government nor pluralism, nor for that matter, liberty and equality, are absolute. Living in society requires the tempering of all in the face of the realities of the human condition but, for those who believe in them, they remain not only basic aspirations but basic requirements for the good society.

The problem is that the humanist form of democracy, such as that practiced in much of the rest of the world, operates from the false concepts of relativism and that everybody is exactly the same. They think in terms of the rights of man, not the rights of individuals as we do in America.

They then attempt often through state power to create this myth in the real world. This is the source of the conflict in American politics today in my opinion.

Democracy is only as functional as the nation and culture the voters live in. America was never founded as a democracy, but a constitutional republic. The Constitution was designed to protect individual liberty from the state - and the irrational mobs that can sometimes over come the political system.

Ancient Athens is often referred to as the cradle of democracy. The Athenians developed a unique system of government in which citizens were allowed to take in the decision-making process. They called it democracy. One of their most famous leaders, Pericles, described their government this way :

"Our government does not copy our neighbors, but is an example to them. It is true that we are called a democracy, for the administration is in the hands of the many and not of the few."

The Athenian form of democracy was called Direct Democracy. All the male citizens would gather, discussed the issues, and then voted on them. This was possible because the male population in Athens was small, about 40,000 men. This was an advanced form of government for again, as Pericles noted, most governments at the time were ruled by monarchs or small groups of people. The idea of giving people the power to make important decisions is an important democratic principle.

Athenian democracy is limited to only male citizens. Women, slaves and foreigners were excluded.

Our Founders realized that the Athenian form of democracy was impractical in large nations. They took the idea of democracy and came up with "representative democracy." Under this system, citizens elect representatives to make these decisions for them. It's for this reasons we have elections through which we elect our leaders.

Thus America is a constitutional republic and not a democracy as such.

The Founding Fathers found the Magna Carta an inspiring source. In 1215, a group of English nobles, demanded certain rights and forced the King to sign the Magna Carta or the Great Charter. 500 hundred years later the American colonists were to use this example to demand their rights from the British King.

These rights included: The right of jury trial, protection of private property, limits on taxation, and some religious freedoms.

Note that these rights were intended to be enjoyed by the rich; it didn't apply to the people. These rights above became a part of our Bill Of Rights and apply to all.

It's long name was An Act Declaring the Rights and Liberties of the Subject and Settling the Succession of the Crown In 1688, William and Mary became the new King and Queen of England through a peaceful revolution known as the Glorious Revolution. To prevent further abuse by the monarchy, Parliament forced them to sign the English Bill of Rights. The Bill then guaranteed certain basic rights to prevent abuses including the following:

Note that the Bill of Rights began by listing the grievances of the nobles against the King. Similarly, the American colonists began the Declaration of Independence by listing their grievances against King George. It was a predecessor of the United States Bill of Rights, the Canadian Charter of Rights and Freedoms, the United Nations Universal Declaration of Human Rights and the European Convention on Human Rights. For example, as with the Bill of Rights, the US constitution requires jury trials and prohibits excessive bail and "cruel and unusual punishments."

Another point is the English Bill of Rights was Blackstone's Commentaries on the Law. Blackstone's law book was the main textbook for law schools in America until 1920 and Jefferson incorporated it's reasoning into the Declaration of Independence, which many consider the preamble to the Constitution. Our rights are given by God and this religious view drove the American revolution.

One of the early steps toward democracy in America was taken aboard the Mayflower by the Pilgrims in 1620. Shortly before their arrival, the colonists agreed on a set of laws that would govern their Plymouth colony in Massachusetts. These laws, which came to be known as the Mayflower Compact, in essence, stated that the government would make "just laws and equal" with the consent of the colonists.

The Mayflower Compact was the first governing document of Plymouth Colony. It was written by the colonists, later together known to history as the Pilgrims, who crossed the Atlantic aboard the Mayflower. Almost half of the colonists were part of a separatist group seeking the freedom to practice Christianity according to their own determination and not the will of the English Church. It was signed on November 11, 1620 by 41 of the ship's more than one hundred passengers. Ref Rothbard, Murray Rothbard (1975). The Founding of Plymouth Colony. Conceived in Liberty. 1. Arlington House Publishers.

This was the logical outcome of the Calvinist' or Puritan theory of government that influenced even non-Puritans. The only problem here is the fact the Mayflower Compact itself swore an oath of loyalty to England. The idea taken from this was a charter between God and man seems to be the main idea carried forth to the American Constitution.

The Jews did indeed invent democracy as practiced in the United States. This democracy was very different from the humanist mob democracy of the French Revolution that dominates Europe. Unlike Greek democracy based on humanist philosophy the French envisioned, American democracy was based on Protestantism.

The Protestant motto "solo scriptorum" (only the Bible) opened the door at least in America of individual interpretation outside the clutches of state churches as was the case in Europe. To quote,

"Protestantism was unimaginable without Jewish theologians (who exposed the incompatibilities of free will and original sin), not to mention Jewish bible translators...Congregations must elect their church elders (Presbyterians) or even their pastors (Congregationalists), rather than accept church hierarchy. If democracy rules ecclesiastical affairs, why not then secular affairs as well?"

Thus what was an established religious institution of Anglo-Saxon Protestantism was carried into the secular realm. This was often from the "liberal wing" (unrelated to the statist philosophy of today) of Protestantism by a number of Separatist groups and churches. The King and the Church of England were far away while in states such as Virginia an alliance of groups such as Baptists, liberal Protestants, Deists, Jews, Quakers, and a number of Anglicans sought to loosen state control of religion and human affairs in general.

America's founders set forth with messianic ambitions. They saw themselves as a new Israel setting out to found a new Jerusalem, as in John Winthrop's famous sermon "On Christian Charity". "We shall find that the God of Israel is among us, when 10 of us shall be able to resist a thousand of our enemies, when He shall make us a praise and glory, that men shall say of succeeding plantations, the Lord make it like that of New England. For we must consider that we shall be as a city upon a hill, the eyes of all people are upon us."

...American democracy grew from a seed-crystal of representative institutions, beginning, as noted, with the election of church officials. Americans are used to governing their own affairs through a vast number of institutions at the capillary level of society.

It would be a big mistake to see democracy as simply unbridled individualism that results in chaos and destroys the system leading often to totalitarianism. One was expected to live in peace in a general system and under the rule of law. This is why so many Americans today are angry at government as the elite attempt to impose European style democracy on Americans. American democracy focuses on the individual, European democracy on the mob operating through the state.

No other individual influenced the author of the Declaration of Independence more than Unitarian John Locke (1632-1704). He was a British philosopher who rejected the idea that Kings had a divine right to rule. Instead, Locke argued that people are the source of power, not kings.

Locke argued that people are born with certain "natural" or "inalienable" rights. These include the right to "life, liberty and property." Government did not give people these rights; rather they are born with them and as such, no government can take them away.

According to Locke, people formed governments to protect their rights, which he called a "social contract." People agreed to obey the government and in return, government had the responsibility to protect peoples' natural rights.

Locke also argued that if the government failed to protect our natural rights, then the people had the right to replace the government. Locke's ideas became very influential in developing democratic ideas. Thomas Jefferson, in writing the Declaration of Independence, drew heavily from the writings of John Locke.

Above: extracts from: Class note - American History by Levi Anthony January 30, 2004 and Wikipedia.

I should be very clear here in regards to the Founding Fathers of America (Jefferson, Franklin, Washington, etc.): If one claims they were Deists on the basis of "God went away" and the radical French Enlightenment of Voltaire and the French Encyclopedists, the answer is clearly no. They clearly believed God was both present and active. They also clearly drew their moral beliefs from Christianity. Most/all clearly rejected the doctrines of the Trinity, Original Sin, predestination, etc. In other words it was often a rejection of Calvinism. (The Puritans) For the most part they would be rational theists or Unitarians.

The primary influences of the US Constitution were John Locke, Montesquieu, the Bible, Greek philosophy, and the Freemasons.

In the top image, George Washington, who presided over the convention, is the figure standing on the dais. The central figures of the portrait are Alexander Hamilton, Benjamin Franklin and James Madison. Painting by Howard Chandler Christy (1873-1952).

The problem is that democracy is not freedom. Democracy is simply majoritarianism, which is inherently incompatible with real freedom. Our founding fathers clearly understood this, as evidenced not only by our republican constitutional system...Simply put, freedom is the absence of government coercion.